Back to Steve Dumolt Main Page

Historical Destinations You Will Want To

Go Out Of Your Way To Experience

The title of this book is European Detours. It is called that because to get to each of the destinations described herein requires the traveler to go out of his/her way to experience it. Granted, it is possible to construct an itinerary that would put any of these destinations in a loop that would make it “on the way” to somewhere else, but as a rule a person who wanted to visit any of these sites would need to make a conscious choice to go there. In some cases, the detour may be only a few blocks away from other tourist sites and entail a short walk. For others, it may require several days of your time and significant amount of determination to get there and back.

There are eleven destinations described here. Each was chosen because it had struck me as someplace special during my travels over the past 30 years. They are not just sites to visit, take a photo or two, check off your list, and then head to the next place. The destinations included in this book have their own stories or particular aspects associated with them that makes a visit more than just another stop on the itinerary. A visit to any of these locations can justifiably be called an experience (IMHO). It is sites like the ones in this book and the stories behind them that have kept me coming back to Europe over the years.

This book is not a tour guide in the usual sense. It is not a coffee table book with lots of beautiful photos. It does not have lists of places to stay or dine. In this book I try to describe a few sites that have appealed to me as having a little more significance than the typical tourist destinations, but might be considered to be out of the way. Most of them acquired their significance because they have a connection to the past. They are the kind of places I sought out because of what happened in the past or because of the experience I could create for myself by going today – or both. The descriptions are not comprehensive but are designed to provide background and historical information to induce the reader to further investigate those sites he/she finds interesting.

These destinations were not chosen based on their isolation. Some of the sites I included may be considered lonely outposts on the edge of civilization, like Sagres at the southwest corner of Portugal, but others are located in the heart of traditional European tourist meccas. Three of my suggested destinations sit in the historic center of Rome.

While I tried to highlight destinations that weren’t on most travelers’ itineraries, I did include some that are fairly well known. The Archbasilica of St. John Lateran is one of the four major cathedrals in Rome, and actually ranks above St. Peter’s in the Roman Catholic hierarchy. La Bocca della Verità, also in the heart of Rome, and Chartres Cathedral, 80 kilometers from Paris, can get busy when tour buses show up. And if you have ever taken a ferry to Santorini during the summer you quickly discovered it wasn’t exactly a deserted tropical island.

The destinations included in this book are shown in the figure below. Four are in Italy (including three in Rome), three each in France and Greece, and one relatively isolated destination in Portugal. 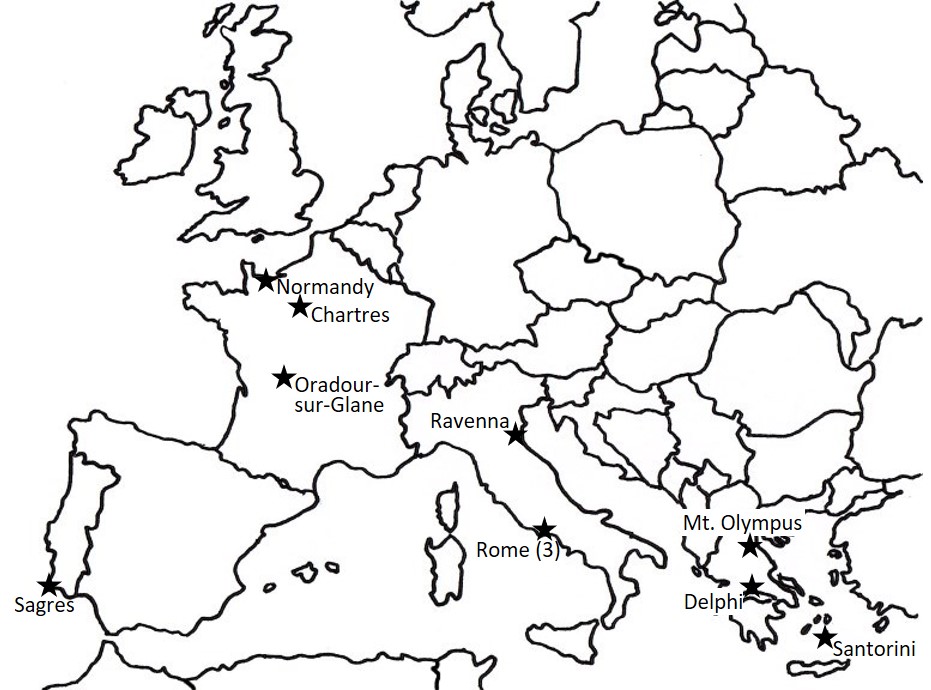 I discovered the destinations in this book through different means. As I said, some of the locations are well-known. Everyone has heard of Mount Olympus, for example. Others I discovered while perusing tour books while planning possible trips. (What do I want to see when I am in Rome?) Still others I found out about through sources traditionally unrelated to travel. For instance, I first learned about Oradour-sur-Glane while watching a documentary on World War II.

Some of the sites exist in a condition similar to that they have been in for centuries. Some are natural and some man-made. Others have changed drastically since their time of significance; some consist of mere remnants of what they used to be -- in a physical sense, anyway. Sometimes it requires a bit of imagination and historical insight to picture the structures and/or activities that make these latter places attractions. Ordaour-sur-Glane is a burned-out shell of a town, Dephi is largely a pile of ruins, and these days Omaha Beach can be described as a tranquil coastline with a bluff behind it.

I want to say something about photographs. Although photos would have enhanced the descriptions of the destinations in this book, I decided not to include any photography. I did this for more than one reason. One, I am not a lawyer. I am not familiar with the laws of the various countries I visited with regard to which photos I may publish and which I may not and under what circumstances. I did not think I am qualified to determine which photos could be legitimately used and how for a (hopefully) profit-making enterprise like this book. Because this effort was supposed to be an initial exploration for me into self-publishing, I didn’t think the expense and labor would be justified for a short, inexpensive book. Another reason I did not include any photos is that this is a book created to be viewed on a Kindle. Since many Kindles do not have the capability to display color photos or figures, I thought that monochrome would not portray the locations in a representative way. In the way of compensation, at the end of each site description I have made key-word suggestions for finding photos on the Internet and I have also placed some of my personal photos (no strings attached) on my own web site at:

(If there is a legitimate objection to the inclusion of any photo on the website, please let me know and I will remove it.)

Many of these destinations are easier to get to if you have your own transportation. In my travels, however, I have used public transportation exclusively – airplanes, trains, metros, buses, ferries, hydrofoils, and my own feet – and have been able to access all the locations, although for most of them not as conveniently or efficiently as if I had rented a car.

When practicable, I try to give general directions and descriptions of approaches in the text but specific locations, directions, and travel arrangements are left to the reader in most cases.

Most of the distances used in the descriptions on this book are in metric units, although English units are sometimes included as well. You should familiarize yourself with metric distances, especially meters and kilometers and how they relate to English units (feet and miles). Unfamiliarity with these measurement units will probably result in confusion and difficulty when trying to make your way through most of the continent of Europe. As a rule of thumb:

I have gone out of my way to see many sites during my travels. Some struck a chord in me and some didn’t. This is a collection of those that did.